Beer production is one of the most complex technological processes in the food industry. The technology of making beer includes the following main stages: obtaining malt from barley, preparation of beer wort, fermentation and after fermentation, beer processing and bottling of the finished product. 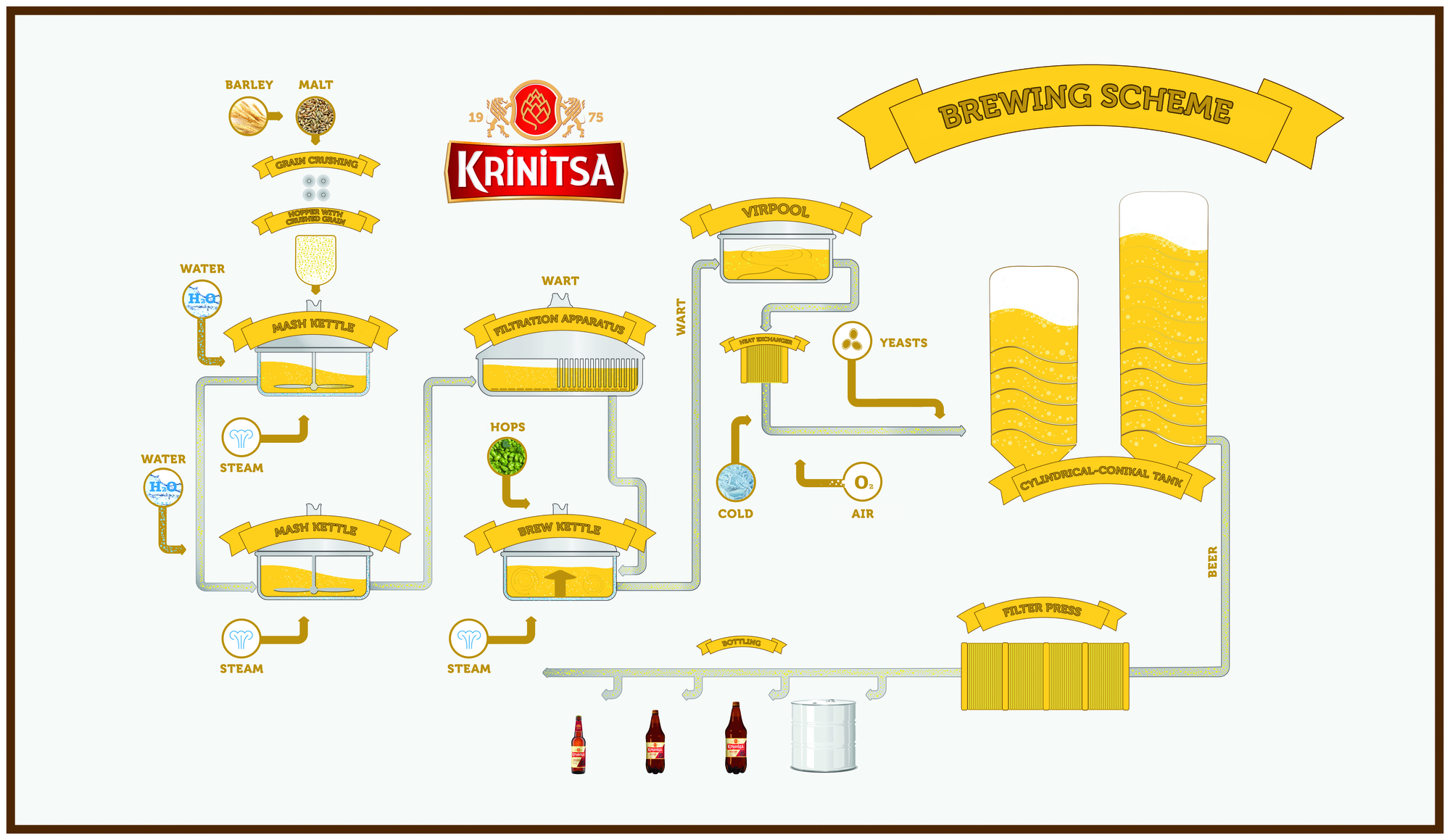 The brewing process begins with the preparation of beer wort.

This is a semi-finished product for making beer. Its production consists of five technological stages:

The choice of malt and its crushing ensure the high quality of the wort. The main part of the grain products in the mash is the decayed malt. Before crushing, it must be cleaned of dust and impurities. Malt is moistened, its shell becomes soft and separates better from the kernel.

During the crushing process, physical and chemical processes are accelerated. This ensures the rapid dissolution of substances and the conversion of insoluble compounds (starch, proteins, etc.) into soluble substances.

In the mash machine, the crushed malt and barley are mixed with water, heating and boiling of the mash mass. The goal is to transfer the maximum amount of substances to a soluble state. To do this, it is necessary to create optimal temperature conditions.

Starch in malt undergoes gelatinization, liquefaction and saccharification. Gelatinization is the swelling of grains that occurs when malt is heated in water. Liquefaction is accompanied by the disintegration of starch grains, as well as a decrease in viscosity. The latter is achieved by crushing swollen grains. Then the starch is converted into sugar, the sugared mash is transferred to filtration.

3. Filtration of the mash

Filtration of the mash is carried out in filtration apparatuses. There are two stages of the process: the first, in which the first (main) wort is filtered, and the second, when the leaching extract is extracted, held by the pellet. In the process of washing the pellet with water, the extract of the first wort held by it passes into the solution.

In order to accelerate diffusion, the pellet is mixed with baking powder and continuously irrigated with hot water. The first wort and washing waters should be transparent, since the presence of small insoluble particles of mash in them gives the beer a rough taste and may be the cause of its poor clarification.

The wort that comes from the filtration apparatus is boiled with hops. The purpose of this process is to stabilize the composition and aromatization. By boiling, the wort is evaporated to a set concentration, and aromatic and bitter substances are extracted from hops.

Sterilization of the wort is necessary to ensure the purity of fermentation and obtain a stable product, because crushed malt always contains a significant amount of microorganisms. Sterilization is achieved after 15 minutes of boiling.

5. Clarification and cooling of wort.

The purpose of clarification and cooling is to precipitate suspended particles, reduce temperature, and saturate the wort with oxygen. Clarification is carried out in hydrocyclone apparatuses. The hot wort enters there in the form of a jet. Suspended particles under the action of hydrodynamic forces gather in the center of the bottom, where sediment is formed.

Clarified hot wort is transferred to cooling. Cold wort, ready for yeast application, must be saturated with dissolved oxygen. For this purpose, sterile filtered air injection is used.

Fermentation and after fermentation of beer is carried out in cylindrical-conical tanks (CCT). In the process of filling them with clarified aerated wort, yeast is introduced into the first cooking. The CCT is filled only by 80-85%% of the total volume, which allows for sufficient free space for the volume of foam formed during active fermentation.

The turbidity of beer is explained by the content of suspended particles in it in the form of yeast cells, protein-tannins, protein substances and hop resins. These microscopic inclusions of the solid phase with their optical properties, which differ from the properties of beer, and cause its turbidity.
Beer clarification, the distribution of dispersed media into liquid and solid phases, – is achieved by separation and filtration. The finished product obtained as a result of the processes carried out is stored in special collections for filtered beer.

At the final stage of the technological process, beer must be poured into various types of packaging. Bottling is carried out on automatic lines in glass bottles, PET containers, aluminum cans, kegs.
Beer is a perishable product, so its storage requires sterile conditions. Pasteurization is used to stabilize the foam drink and make it more transparent. Beer is slowly heated to a certain temperature and then bottled. This allows you to significantly increase the shelf life of the product.