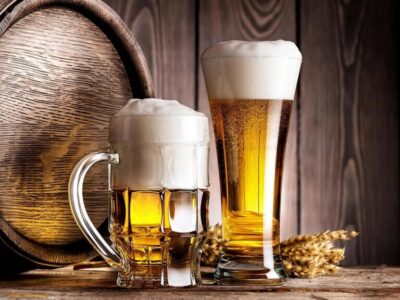 Do you know what a beer body is? What is it like? Why is this concept so important for evaluating the taste and quality characteristics of a beer?

This question is best explained by the term used by beer connoisseurs around the world. Mouthfeel is literally translated from English as “what your mouth feels”, or mouthfeel. There is no such word in Russian, so professionals use a second name for the same concept to evaluate beer: body.

Carbonation, i.e. the presence of “gases” in the beer, is important for determining the beer’s body. If the content of carbonic acid is high, the taster’s mouth fills with small needles, which prevent him from feeling the taste of the foamy drink to the fullest. That is, the carbonation of the beer must be moderate, otherwise it will be difficult to determine its strength.

So, what is the body of the beer? The sensation that forms in the mouth at the moment of sipping beer is the body.

The most commonly used terms to describe beer body are light, watery, dense, full-bodied, uneven, rounded, or balanced. Let’s briefly discuss each of these.

Light beer has a light body, which is well swallowed despite the complexity of taste and alcohol content.

A watery beer is considered to be a beer with a blurred flavor that does not give a sensation in the mouth. Another name for such a drink is liquid.

The dense, full-bodied body is the flip side of watery. It is achieved by the right ratio of ingredients in the recipe.

An uneven body is a beer in which a hint of some flavor stands out too much, clogging up the rest. Rounded body – this characteristic means completeness of flavor, its balance.

How do you learn to identify what kind of body a particular beer has? In fact, the beer body is everything you feel in your mouth while tasting it, from the touch of the drink on your lips to swallowing it.

This is where practice will help, so try different brews. Start a taster’s book and write down what you feel. Over time, you’ll learn to describe the beer body in the most appropriate words.

Do you know what a whole beer is? What is it like? Why is this term so important for recognizing the taste and taste characteristics of beer?

The most important thing for all this is to try to explain the term, which is used by the beer connoisseurs in the world. Mouthfeel in English generally means “what the mouth feels like”, or mouth-reading. There is no such word in Russian, therefore professionals use another name for the term “body”.

For the purpose of defining the “body” is important, it means the presence of “gases” in the beer. When the wine is high in the morning, the mouth of the drinker is attacked by small needles, which express the taste of the foamy drink in its measure. It means that beer carnival must be moderate, otherwise its listening quality will be impossible to find out.

So what is a whole beer? Feelings that occur in a year at the moment of a grain of beer are the whole beer.

The most frequently used words for describing the whole – light, vigorous, rich, delicate, round, or balanced. Let us briefly discuss each of them.

A light drink that is good for drinking, not depending on the composition of the drink and the alcohol intake.

The drink with a fuzzy thick is considered unreliable, which does not give any sensations in the year. Otherwise, this drink is called vodka.

A fine, saturated body is the opposite side of the vadzia. It is attained by rightful judgments of the members of the repertoire.

Non-governmental purpose in the brew, in which it is not possible to get a little bit dense, forgetting the rest. The circle is a given characteristic that denotes the powwow of gusto, its imbalance.

How do you learn to identify what is the purpose of this or that beer? The actual drinking sense is all that you feel in a year at the time of tasting, from drinking to drinking to enjoying it.

Practice is helpful here, so try different techniques. Start a book of the devotee and write down your feelings. As time goes by, you will learn to describe the subject in the most appropriate words.